In this assignment, we'll work on generating an intermediate representation for a source program, to be passed on to later phases of the compiler. Specifically, we'll modify the Python parser from assignment 2 to generate an abstract syntax tree (AST) representing the source program. In addition, we'll take a first stab at generating code using this AST by generating a GraphViz specification of the AST itself. This will enable us to visualize the AST.

There are a few major parts to this assignment, described below. To get you started, you are provided with a Flex scanner specification in scanner.l and a Bison parser specification in parser.y that, together with the main() function in main.cpp, solve the problem defined in assignment 2. There is also a makefile that specifies compilation for the parser. Instead of using these files, you may also start with your own solution to assignment 2, if you'd like.

1. Implement one or more data structures for building an AST

An abstract syntax tree (AST) is a tree-based representation of the source program in which each node in the tree represents a coherent semantic construct in the source program. An AST closely resembles a parse tree but is more compact because it eliminates or contracts many of the nodes corresponding to nonterminals. For example, an entire if statement might be represented by a single node in an AST instead of by separate nodes for each of its individual components, as you'd see in a typical parse tree. You can see visualizations of example ASTs in the example_output/ directory.

Your first task in this assignment is to implement a set of one or more data structures that allow you to construct an AST for a source program written in the same subset of Python we worked with for assignment 2. To do this, you'll have to figure out what specific language constructs need to be represented by AST nodes, what data might be associated with each of these nodes, and how each type of node connects to other nodes in the AST.

There are different approaches to this problem. For example, you might implement a single, general purpose C++ class or C structure, capable of representing all programmatic constructs in the source language. Then, each time your parser encountered any kind of program construct, it would create a new object of this class/structure, add the appropriate data to represent the recognized construct, and pass the newly-created node up in the parse tree to be combined with higher-level nodes.

2. Modify the parser to use your data structures to build an AST

Your next task is to modify the parser included in the starter code (or your own parser from assignment 2) to build an AST using the data structures you defined above. The general idea here is to modify the actions associated with each of the parser's grammar rules to return an AST node instead of returning a string of C++ code. This node will then potentially be combined with other nodes when a higher-level construct is recognized.

Though the end goal here is different from the foal of assignment 2, the mechanics will be similar to generating a C++ translation. In particular, to generate a string containing C++ translation for the language construct on the left-hand side of a particular grammar production, you assumed that you had C++ strings for the language constructs on the right-hand side of the production (specifically in $1, $2, $3, etc.), and you concatenated these together (along with proper punctuation, etc.) to form the left-hand side's C++ string (i.e. $$).

You'll have to do a few other things in the parser to get this all working, as well. For example, the current parser uses the type std::string* for all grammar symbols. You'll instead have to use the appropriate AST node class/structure as the type for each nonterminal symbol. You'll likely want to continue to represent all terminals with std::string*, since the values for the terminals will come from the scanner, and you don't necessarily want your scanner to worry about building AST nodes. The scanner may or may not need minor changes to make everything work.

Once you have the parser building your AST, save the root node of the AST in a global variable, similar to the way the current parser provided in the starter code saves the entire translated program string in a global variable. If you'd like, you can modify the main() function to print out some information about the AST using this global variable.

3. Use your AST to generate a GraphViz specification to visualize the AST

Finally, to get practice generating code from an AST, implement functionality to use your AST to generate its own GraphViz specification. You should specifically write a specification that can be passed to the dot program (which is installed on the ENGR servers) to generate a visualization of the AST.

GraphViz uses a very simple notation for representing trees and graphs. Here's an example of a simple GraphViz tree specification:

Here, we create a new directed graph (i.e. a "digraph") in which each node is first declared and assigned a label (i.e. a string to be printed inside the node in the visualization of the tree). Following the node declarations, all (directed) edges in the tree are represented using the -> operator.

Assuming this file was named tree.gv, we could use it to generate a PNG image visualizing the specified tree with the following command:

This is the image that would be produced (in tree.png): 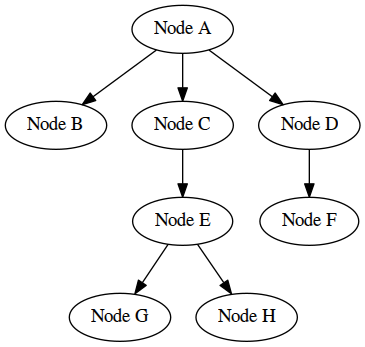 Two primary design considerations when writing your traversal/code generation functions will be how to ensure that each AST node is given a unique identifier in the GraphViz specification and how to concatenate together all of the GraphViz code produced for the individual AST nodes.

You should use your code generation functions by invoking them on the root node of the AST from your main() function, and you should output the generated GraphViz code to stdout, so it can be inspected or saved to a file.

There are some simple Python programs you may use for testing your AST builder included in the testing_code/ directory. Example outputs (both a .png visualization and a .gv GraphView specification) for these programs are included in the example_output/ directory. Note that the ASTs your parser generates may be slightly different than the ones included here, depending on how you choose to represent nodes in the AST. This is OK.

We'll be using GitHub Classroom for this assignment, and you will submit your assignment via GitHub. Make sure your completed files are committed and pushed by the assignment's deadline to the master branch of the GitHub repo that was created for you by GitHub Classroom. A good way to check whether your files are safely submitted is to look at the master branch your assignment repo on the github.com website (i.e. https://github.com/osu-cs480-sp19/assignment-3-YourGitHubUsername/). If your changes show up there, you can consider your files submitted.

This assignment is worth 100 points total, broken down as follows: